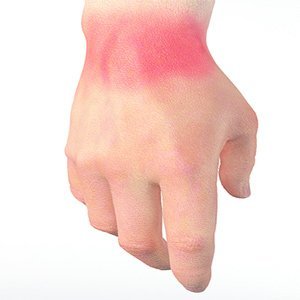 The wrist is a commonly seen injured joint in the body. Problems include sprains and strains as well as fractures which can occur with lifting and carrying heavy objects, while operating machinery, bracing against a fall, or from sports-related injuries.

Some of the common wrist injuries include:

Ligamentous Injuries: Ligaments are tissues that connect bones to other bones. They are made up of several fibres and one or all of the fibres may be involved. Complete ligament injury occurs when all the fibres are torn. A ligament injury may cause pain and swelling and limit the movement of wrist joints. Ligament injuries are effectively treated with splinting and taping with restriction of movement of the injured structures.

Fractures: A fracture is a break in the bone which occurs when more force than the bearable limit is applied against a bone. Crushing injuries to the wrist occur due to high degrees of force or pressure and may also cause fractures. A fracture may cause severe pain, swelling, bruising or bleeding, discoloration of the skin and limit the mobility of the limb. Fractures of the wrist bones can be treated by using a cast or splint while the bone heals. Sometimes surgery may be needed where plates, pins or screws may be placed to keep the joint stable while healing.

Repetitive Trauma Syndrome: Repetitive stress injury occurs as a result of repeated similar movements for long periods of time. This often causes pressure on the joints resulting in inflammation, pain, and decreased function in the extremity. The condition is more likely to develop with repetitive, rapid, forceful and prolonged movements of the wrist, or from vibration or frequent pushing, pulling or carrying heavy objects. Carpal tunnel syndrome is the most common of these syndromes.

Carpal Tunnel Syndrome: Carpal tunnel syndrome is a condition characterized by numbness or pain in the thumb and first two fingers and occurs when the median nerve is compressed at the wrist. Carpal tunnel syndrome is often a common complaint in individuals who use their hands for prolonged periods of time in a particular occupation such as computer work. Immobilization of the affected part for a certain period may help heal the condition. Medications, physical therapy, and surgery may also be recommended. Often, splinting for a short period of time can treat the condition.

Any problem causing pain, swelling, discoloration, numbness or a tingling sensation, or abnormal position of the wrist that persists for more than two or three days should be evaluated by your doctor to establish the cause and obtain the best treatment as early as possible.