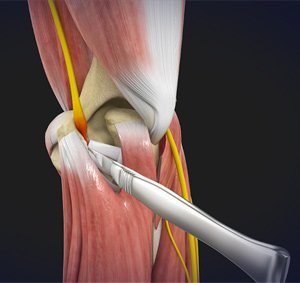 Different surgeries are performed to treat your condition.

Your surgeon will decide which surgery would be best for you depending on your conditions.

If your nerve compression is mild your surgeon may recommend a medial epicondylectomy. In this procedure your surgeon will make an incision over the medial epicondyle, the bony bump on the inside of the elbow. The cubital tunnel is cut open through the soft tissue roof exposing the ulnar nerve. The forearm muscles or flexor muscles are cut and detached from the epicondyle. Using special instruments, your surgeon will shave away the bump, freeing the ulnar nerve to glide smoothly within the cubital tunnel without pressure from the bump. The flexor muscles are then reattached to the area of shaved bone with special sutures. The incision is then closed with sutures and covered with a dressing.